India beat South Africa by 153 runs in the second cricket one-dayer and went 2-0 up in the three-match series. de Villiers put up a fighting 114 not out in 101 balls, but there was no way the South Africans could reach anywhere near the massive 401/3 that India put on the board with help from Sachin's 200*. It was the first ever double-hundred in the game's history and Sachin's 46th one-day century.
After Karthik who hit 79 departed, Yusuf Pathan upped the pace with 36 off 23 balls, including two huge sixes. Dhoni scored 68 from just 35 balls and provided fine support for Sachin towards the end. 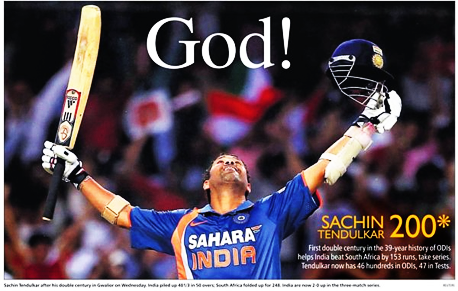 Sachin Tendulkar became the first man ever to score double hundred in one-dayers as he propelled India to 401 for three in the second ODI at Gwalior. The 36-year-old hit 25 fours and three sixes in a stunning 200 off 147 balls.It passed the previous best of 194, set by Pakistan's Saeed Anwar in 1997 and Zimbabwe's Charles Coventry last year. His previous best one-day knock was the 186 not out scored against New Zealand in 1999.

South Africa Innings - All out

India vs South Africa in India 2010

India, who became the number-one Test side in December, will host a hastily-arranged two-Test series against South Africa - ranked second in Test cricket - at Nagpur and Kolkata, the Indian cricket board announced on Sunday. South Africa will also play three one-day internationals during the tour starting next month.
South Africa drew a three-Test series 1-1 on their last tour of India in 2008. Series Schedule:

Free Windows 8.1 App: The latest Cricket news from your favorite websites. You can also add new RSS feeds based on your interests to see them all in one place. Works on any device that supports Win 8.